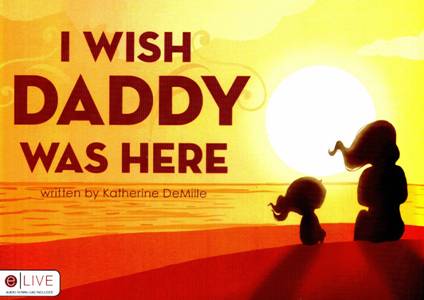 You don't have to tell Kat DeMille about what it's like to be home for the holidays, but still without the ones you love.

The former Navy brat grew up to become an Air Force wife, so she doesn't need to be reminded of the 425,000 Americans who will celebrate the holidays somewhere other than home this year, according to U.S. Department of Defense statistics. She's been living those holidays most of her life.

"One of the most important things I learned as a kid was that it is okay to feel sad and to miss the ones we love," said DeMille, author of the children's book I Wish Daddy Was Here (www.iwishdaddywashere.com). "Children take their cues from the adults who surround them, and in military families, there is always this semblance of steely reserve. They don't want to show sadness around the kids, so all the kids see are the brave faces, and it makes it easy for them to bottle up their sadness or feel that missing their moms or dads is a bad thing. I had to unlearn that misconception, and it actually helped me feel better."

DeMille believes kids should know that while it's important to move on with their daily lives while a parent is deployed, that it's also okay to miss them and to let their sadness out when they need to. She said that part of the message of her children's book is that the sadness is a part of coping with the reality of modern troop deployments.

"My husband is currently deployed right now, so my daughter and I are living it along with every other military family this holiday season," she added. "Especially during this time of year, missing a family member is like the elephant in the room that no one wants to acknowledge. The military life causes many families to endure extended separation. How we deal with the time apart makes a big difference in a child's life."

One of the key parts of helping children get through a holiday without a parent who is deployed is to get them to talk about what they are feeling, so they can work through it faster.

"Any job that takes a parent away for an extended period is difficult on a child," DeMille said. "Letting your children express their feelings will help them get through the separation. Life does not stop because someone we love is away, but that does not mean we cannot miss them. Emotions can be hard for a child to talk about. Letting your child know that you feel sad, as well, let's them know it is okay to have feelings and it makes them feel safe to express them to you. It brings them a level of security and makes them feel more mature when they know they are feeling the same thing as the adults around them. More than that, it helps them become stronger and more capable of dealing with the demands of being in a military family."

Kat DeMille grew up in a Navy family and married into the Air Force. She studied Hotel/Restaurant Management in school, and still enjoys cooking. She works with stained glass windows to help pass the time during deployments, and is the proud mother of one daughter. Incidentally, Kat's family was the basis for the characters in her book.

More in this category: « Are You Causing Your Pet to be Stressed? Mommy Gets Schooled »