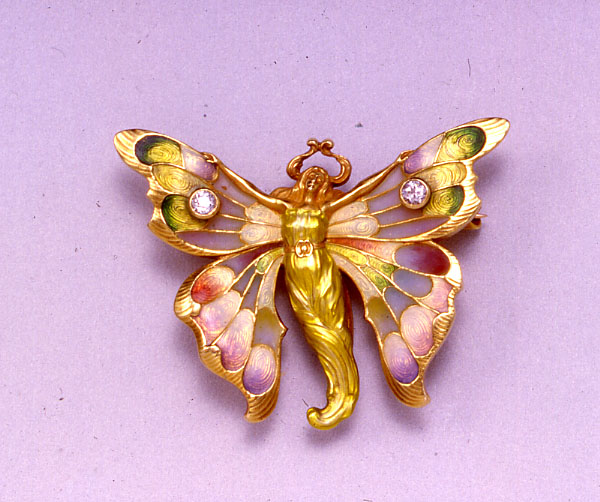 New Gallery Launched in Ballantine House Space With The Glitter & The Gold: Jewelry From the Newark Museum

The launch this month of the Lore Ross Jewelry Gallery places the Newark Museum in unique company as only the fourth museum in the United States with dedicated display spaces for the exhibition of their permanent jewelry collections. The Newark Museum's large and diverse collection of European and American jewelry began in 1911 with the gift of a rare New York 18th-century gold pocket watch.

The Lore Ross Jewelry Gallery is located on the second floor of the historic 1885 Ballantine House and opens with an exhibition entitled The Glitter & The Gold: Jewelry From the Newark Museum, showcasing a broad cross-section of masterworks from the Museum's extensive jewelry holdings, dating from the early 1700s to the present day, including objects from Newark's own historic jewelry industry.

One of the highlights of the inaugural display is a rare diamond aigrette ornament, designed in Europe in the 1740s to reflect the West's fascination with the arts of India. Modeled as a spray of feathers tied with a bow, the aigrette is set with dozens of rose-cut diamonds from the Golconda mines of India.

"The aigrette," said Newark Museum Senior Curator and Curator of Decorative Arts Ulysses Grant Dietz, "marked the beginning of the desire among aristocratic consumers in the West for all-diamond jewelry. A modern-day parallel to that piece is a glittering art-deco bracelet, made in the late 1920s in Philadelphia by J. E. Caldwell & Co., one of the premier jewelers in America. South African diamonds, cut into a wide range of geometric shapes, bring the glitter and dazzle of the Jazz Age to its design."

More contemporary work in the exhibition includes a daring abstraction in silver, designed by Henning Koppel for Georg Jensen in 1948; as well as a chic cuff bracelet of lacquered iron inlaid with gold, designed by Angela Cummings for Tiffany & Co. in 1978.

According to Dietz, a well-known speaker and writer on jewelry history and a member of the Board of the American Society Jewelry Historians, future exhibitions in the new gallery will include a section dedicated to showcasing jewelry made in Newark. The Museum began acquiring Newark-made jewelry in the early 1990s to document the City's historic 100-year position (1850 -1950) as America's premier jewelry manufacturing center.

Newark's output as a jewelry center is represented with an iconic piece known as the "Butterfly Lady" brooch. Designed in 1904 by Henry Blank & Co., the brooch is covered in translucent enamels and highlighted with small diamonds. The "Butterfly Lady," while small in scale, vividly represents America's fine jewelry industry, which tamed the exotic art nouveau jewels of Europe to appeal to the vast American market. Its Parisian counterpoint is a spectacular neck-plaque from circa 1900 by French jeweler Louis Aucoc, who trained René Lalique. The curved plaque, which might originally have been worn on a seed-pearl choker-style neck piece, features translucent lavender poppies and tiny diamonds that give the effect of moonlight shimmering across a pond.

The Newark Museum's new gallery was conceived as a personal tribute to the late Lore Ross, whose interest in jewelry and design was an abiding passion, and to mark Mrs. Ross's bequest of $1 million to the Museum's ongoing capital and endowment fund-raising initiative, according to Board Chair Arlene Lieberman.

Lore Ross, who died in February, 2009, was a "loyal friend of the Museum and of Newark, a woman of true substance and style," said Museum Director and CEO Mary Sue Sweeney Price. "The Museum and its trustees are grateful for her support of our decorative arts collection, enabling us to create a permanent gallery devoted to our fabulous collection and the legacy of Newark's jewelry industry."

She and her husband, noted Philanthropist Eric Ross, who died in 2010, lived in Essex County for more than 60 years, and together were major benefactors of such New Jersey institutions as NJPAC and the JCC of Metrowest as well as the National Holocaust Museum in Washington, DC, and Ben Gurion University in Israel, among many others.

"The Museum also thanks the many donors whose gifts have expanded the collection's holdings, especially those gifts associated with important family histories that might be otherwise lost," Dietz said. "As Curator of Decorative Arts, it has long been my mission to create a link between jewelry and other aspects of the decorative arts such as silversmithing and contemporary craft. With each new addition to our growing jewelry collection, we enrich our ability to tell the many remarkable stories of jewelry's role in the world of culture and design."

Dietz said the jewelry display in the Lore Ross Jewelry gallery will continue to change over time, as new additions to the Museum's collection are added. The gallery will be open during regular Museum hours.

To round out a day of appreciating objects beautiful at the Museum, visitors to the new Lore Ross Jewelry Gallery are urged to also see Posing Beauty: African-American Images from the 1890's to the Present, a unique exploration of the ways African-American beauty has been portrayed in the media.