"Knowing Your Value" by Mika Brzezinski

Knowing Your Value by Mika Brzezinski is an important new book. It is an introspection of her career and the difficulty, often faced by career women, she had in asking for a salary that reflected her value to the company. She interviewed numerous successful women to compare notes and found almost universal agreement with her theory that women need to be strong and firm in their salary negotiations.

Going through several detours in her career, she finally became co-anchor on the morning political show, Morning Joe. As the show became successful, she was aware that she was being paid considerably less than several of the other men on the program. Joe Scarborough, for example, the key host of the show was getting paid 14 times what Mika was earning! If you ever watched the show you will know that was not fair or reasonable. The salary gap bothered Mika big time. On various occasions, she would approach the "top brass" with little results. Even Joe realized Mika was underpaid. One year he shared his year-end bonus with Mika. Finally, she concluded that she could not continue to work for a company that did not value her fairly. Getting tougher and smarter in her salary negotiations has brought her much closer to where she thinks is reasonable.

This is an excellent read. Her point that women often put more value on being liked than being paid their value is frequently a stumbling point in negotiations. Every working woman who has to swim with the sharks can learn from this book. What makes the book important is that Mika takes the blame for accepting these conditions. She doesn't try to hide behind excuses. It is the ultimate book on personal accountability. 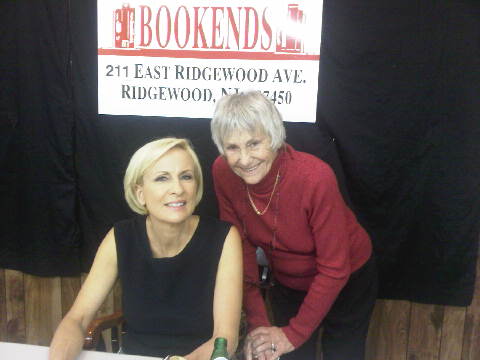 Judy Chapman with Mika Brzezinski
The book came out last week and I visited Bookends in Ridgewood for her book signing. She was as forthright in person as she is in the book.
×
Stay Informed

When you subscribe to the blog, we will send you an e-mail when there are new updates on the site so you wouldn't miss them.

The Power of the Hammer
2011 Governor's Conference

No comments made yet. Be the first to submit a comment